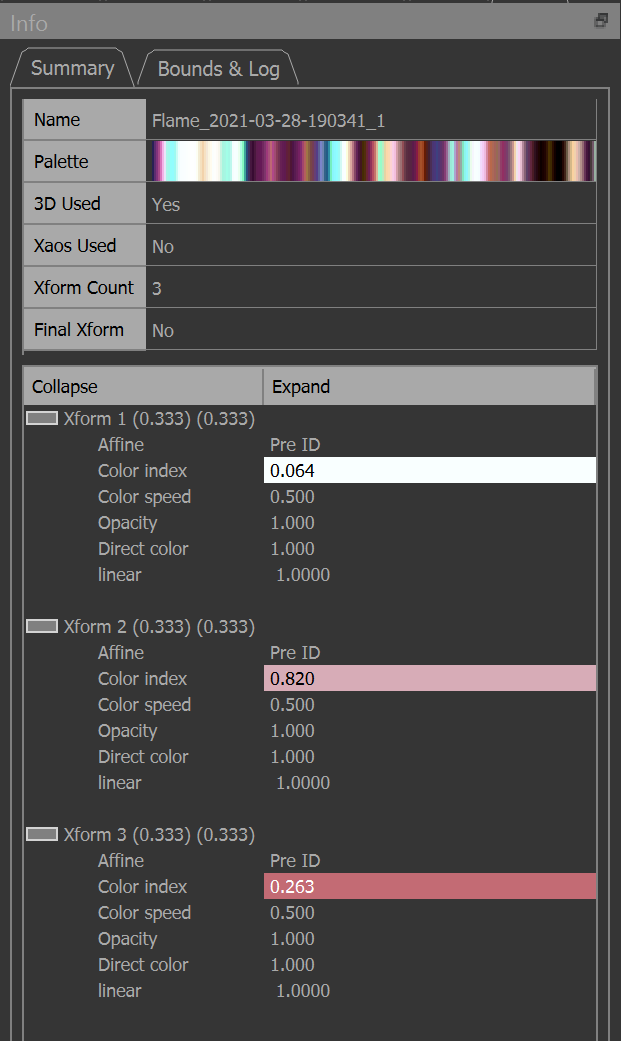 This tab gives a rough overview of the attributes of the current flame and is updated on every completed render. It serves as a way to easily tell what the major features of the flame are without having to manually inspect all of the UI elements across the program. After a quick glance here, you can get a good idea of the structure of the current flame.

Note this does not list every field in the flame. Instead, it is a stripped down list of only the ones which are most important for quickly determining its structure.

The first section is a table which lists the following fields of interest: Name, palette, xform count and whether 3D, xaos or final xform are used.

The tree will have one root level element for each xform in the current flame. Their child nodes will list the most important attributes of each xform.

One root node for each xform. The left column lists various attributes serially.

Shown as “Xform x” where x is the 1-based index of the xform.

Shown as “(x)” where x is the value entered in the weight field of the xform.

Shown as “(x)” after weight, where x is the normalized weight value.

Ex: 4 xforms each with a weight of 1, would have 0.25 for their normalized weights.

Shown as “Linked to x” where x is the 1-based index of the xform it’s linked to. If it’s not linked, nothing additional is shown.

Shown in the second column as “x” where x is the xform name. If it has no name, nothing additional is shown.

Additional information about each xform is shown beneath each root node.

A non-identity pre affine is used, and the post affine is the identity transform and is therefore not used. This is the most common case.

Both transforms are the identity transform, which means pre has no effect and post is unused.

Both affines are non identity and are therefore used with effect.

These are just simple displays of their respective values.

Each variation is listed as a child node with its name in the left column and its weight in the right column.

Each child node below lists all of the variables used in the variation in the left column and their values in the right column.

Note that you can drag the variations up or down to change the order in which they are applied. For most variations this will not matter, but for a select few, as well as pre and post variations, order does matter.

This order will be preserved when saving the file as well.